“This is the first big win I’ve ever had,” said Steve Wilson of Louisville, Kentucky, after accepting the USEF National Pair Horse Driving Championship from U.S. Equestrian Federation president Chrystine Tauber after the final cones test. “I’m the oldest here and the least experienced at the sport but I’ve continued to work at it. Germany is next for the summer, so I can gain more experience in Europe.” Reserve went to Casey Zubek (176.45) of Manhattan, Illinois.

Wilson piloted his grey Lipizzan pair to an early lead in dressage (47.72) on Friday, maintained position near the top of the leaderboards for marathon, and delivered the strongest cones (6.33) performance of his division to earn his first national driving title on a final cumulative score of 164.92. “I wasn’t shopping for this breed when I started looking for a team, but I love them. They’re the horse Napoleon rode and have such a deep history serving the military as well as dressage. They’re athletic, with great action.” Wilson also received the Horse Gym USA Top Equine Athlete Award for his team’s superb fitness.

USEF Pair Pony Driving Champion Amy Cross, of Aiken, South Carolina, confessed she was nervous going into the dressage phase with Welsh Cob brothers, Braakmoor Clownieclark and Braakmoor Common: “I knew I needed a good dressage score. We had a few bobbles in marathon, then came back and had a nice cones test. I just kept reminding myself we were prepared and we knew what we had to do.”

Cross’s high anxiety never translated through her reins as her ponies delivered in dressage (42.82), led through much of the marathon (save for the “bobble” that briefly dropped them mid-phase into second-place), and had a flawless cones performance. She accepted the USEF title on a 134.40 final score ahead of reserve champion, Katie Whaley (138.30).

Former pairs driving champion Tracey Morgan of Beallsville, Maryland was quick to give credit for her USEF Single Pony Championship title where credit was due: with Fuego 88. “Singles have to do every bit of the work, every step of the way and be both calm and cooperative, yet aggressive in their marathon. This pony and I are on the third year of our relationship together.”

The harmony between Morgan and her German Riding Pony stayed consistently evident as they topped dressage (43.84), stayed near or at the top of their marathon sections, and only added three additional points to their final 130.17 winning score after cones. “I believe I’ve found my perfect partner,” she said with a broad grin. 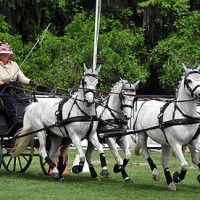 USEF National Four-in-Hand Pony champion Heather Schneider of Palm City, Florida went with the “practice makes perfect” approach to becoming a champion. “Chester Weber said it would take six years to get a team to come together and he was right! But,” she added, referring to her match Welsh grey, “I’ve also been really blessed with good ponies.”

Ocala host and competitor Chester Weber was credited as an inspiration to these drivers more than once, and continued to live up to those expectations with an FEI Four-in-Hand Horse victory. Weber took his KWPN team to the lead through all three phases of the division. He proved once again why he has earned the moniker “Mr. Dressage” by posting one of the best (33.45) dressage scores of his career before continuing his lead through marathon and cones to result in a 147.49 win. Fellow Floridian Misdee Wrigley-Miller of Sarasota was reserve (212.26).

Wrapping up the FEI division, the FEI Single Horse honors went to Suzy Stafford of Wilmington, Delaware and her Morgan, PVF Peace of Mind, who lived up to her name by turning in first-place after first-place for its whip across the phases to the final 139.46 score.

In keeping with the Live Oak International mission to encourage and promote horse sport, the driving program also offered a number of Intermediate wins, including a second consecutive Intermediate Pair Horse title for Georgian Grandes whip Max Montoya of Hebron, Kentucky (159.68); an Intermediate Four-in-Hand Horse win for Craig Grange (238.39) of Morriston, Florida; and an Intermediate Single Horse title for local favorite Ellen Epstein of Ocala and her bay KWPN, Alex.

“Every win feels as good as the first,” concluded Intermediate Pair Pony champion, Boots Wright, of Ocala, who has been competing faithfully at Live Oak International since the show started 23 years ago. “It’s a world class venue that as done so much to better our sport.”

While Wright has every intention of continuing that tradition herself, the combined driving program concluded on Sunday afternoon with a touching retirement ceremony for another Germany Riding Pony, Danny Lou, owned by Jennifer Matheson of Aiken. Friday’s dressage phase was the grand old equine veteran’s last trip around a competitive arena, and he took his whip for one last trip into the ribbons, to finish third in their test on a 56.58 final score. “He’ll get to enjoy just being a pony,” Matheson lovingly said.

Also presented, and sponsored by Michael Freund, were the Jean Keathley Memorial Award to Chester Weber, as the FEI driver with the lowest dressage score; Anne Bliss Memorial Award to Misdee Wrigley-Miller, as the most elegant lady driver; the Katie Williams Memorial Award (donated by friends of Katie Williams) to the best-conditioned entry; and the Hanzi Award (donated by Chester Weber) to Ellen Epstein and Alex V, determined the best horse or pony of the competition in the opinion of the judge. Two other awards honored equine health — the Omega Alpha Healthy Horse Award, donated by Omega Alpha Pharmaceuticals Inc., went to G. Wilson Groves; and the HORSE GYM USA® Top Equine Athlete Award was won by Alison Stroud for the admirable fitness of her team.

In 2016, Live Oak International will be nearing a quarter century as the only event of its kind in America to bring horse lovers and families alike to a world-class schedule of combined driving and Grand Prix show jumping competition. For complete results and to learn more, see www.liveoakinternational.com.