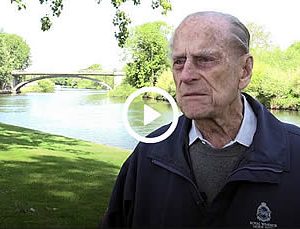 Lexington, Ky. – Prince Philip, Duke of Edinburgh gave his first and only post-retirement public interview this week to US Equestrian Board Member Misdee Wrigley Miller at the esteemed Royal Windsor Horse Show in Great Britain. His involvement and love of the international equestrian sport, combined driving, was at the top of his list for discussion.

Click here to watch the exclusive interview with Prince Philip, Duke of Edinburgh.

Serving as the President of the Fédération Equestre International (FEI) from 1964 to 1986, the Duke was influential in helping to standardize the international rules for combined driving and bringing the sport to the Royal Windsor Horse Show. His own involvement in the sport started when he was 50 after he decided it was time to give up playing polo.

“I was looking around to see what was next, you know, what was available,” said Prince Philip. “I thought to myself, ‘We have got horses and carriage, so why don’t we have a go?’ So, I borrowed four horses from the stables and took them to Norfolk and practiced. The second competition I entered was the European championship.”

With the Duke’s 96th birthday on the horizon, he has been participating in combined driving for roughly 46 years. His good-humored interview was his first public media appearance since the announcement of his retirement from royal duties earlier this month. The Duke granted the interview to friend and fellow combined-driving competitor Misdee Wrigley Miller.

The Royal Windsor Horse Show hosts the CAIO4* Land Rover International Driving Grand Prix, one of the most important driving events in the United Kingdom and a FEI World Cup™ qualifier.

Be sure to follow US Equestrian on social media @USEquestrian and @USEFNetwork for updates and social coverage of the event.